Castle Arcana remains an important part of the MuseArts history. 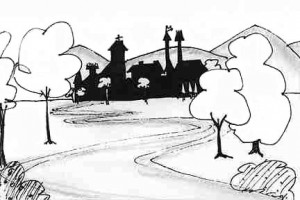 When we first started the company, we thought that we would develop online exhibits for museums. We had both worked in museums creating real exhibits enjoyed by people of all ages and backgrounds, and felt that the Internet offered a chance to do much of the same at a substantially lower cost.

This was the late 1990’s. At the time, most museums were barely interested in the internet, let alone web exhibits. No museums hired us.

We still wanted to play with the ideas of architecture, layout, and exploring a place within a web site. There was something appealing about staking out some space and seeing what we could do with it. We started in on the Castle.

Lise would describe rooms and Chris would draw them. We scanned them in and began to link them together. As we went, we’d add surprises and special features. 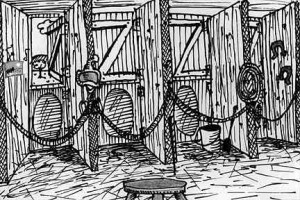 This project gave us a chance to explore web programming and web graphics. We learned all of the basics of web design, from image formats to HTML.

It also allowed us to try out things that clients weren’t requesting. The MuseArts approach of doing work for ourselves and building up a library of our own projects (in addition to doing work for others) started here.

There are over 150 hand-drawn rooms of this castle in Crumpton. It includes living areas, a basement, upper floor, garden maze, tunnels, an elevator, a contraption to go to the vacation house in the country, and much, much more.

Ahead of Its Time

At the time Castle Arcana was launched, 14.4k modems and small screens were common, making this a graphically intensive site to visit. The pages loaded slowly, which added a bit of mystery but also kept people from fully exploring the site. 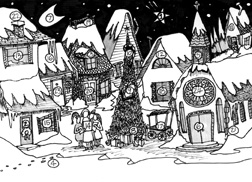 At Christmas one year, we decided to re-decorate many of the rooms with greens and holiday effects. We added the Castle Arcana Christmas Calendar and other holiday-themed interactive toys. This page has become extremely popular around the world and is an annual tradition for many.

When it debuted, we jokingly called Castle Arcana the oldest gothic mansion on the web. Years later, it really is.

And, what is even more amazing is that it still works.

Donate to help with upkeep of Castle Arcana.